MS Dhoni has been under some real scrutiny since stepping down as Test captain. His relevance in the Indian side has been questioned one too many times. However, on the 17th of September, Dhoni ‘the finisher’ reminded the world exactly why he had been given that nickname as he brought his side home during the first international Help for Heroes Twenty20 match. Dhoni who was part of the all-star line-up finished off the innings with a couple of big boundaries reminiscent of his 2011 World Cup finish against Sri Lanka.

It was a wonderful evening at the Oval, flocks of people had come to support the cause and watch some legends on the field once again. ‘Rest of the World’ led by Brendon McCullum elected to bat. It was quite something to see all these international superstars play together. Graeme Smith fell early but Matthew Hayden, Brian Lara built back up and Mahela Jayawardena put on a show for the crowd with a flourish of boundaries. He brought up his 48 in just 28 balls with six beautiful boundaries. Backed up by Brendon McCullum (who was wearing a GoPro) and Scott Styris they reached 158.

The Help for Heroes XI however, responded as lavishly. Captain Andrew Strauss and Virender Sehwag got off to a flyer and Dhoni (backed up by Middlesex player, Dawid Malan) finished off the game to an encore of his name, a few boundaries and three balls to spare. It was an incredible evening for everyone and the charity raised £250,000. Hopefully it will become an annual fixture where people can come and enjoy watching their favourite players altogether.

Did he? Didn’t he? Was it intentional? Was it reflex?

It’s impossible to know Stokes’ full intention when he got his arm in the way of the ball, but slowing it down to watch him move is not the right way of doing it. It’s like watching someone fire a machine gun in slow motion and thinking the person was accurately firing at a target rather than blindly shooting in a general direction.

The more you watch the replays in slow motion, the more it looks out. The more you watch it in full speed, the more unsure you become. If a big man picks up a ball and throws it in your general direction from halfway down the pitch, you have no idea if it’s coming to hit you or not. You react. It looks so deliberate in slow motion. The ball almost sticks in his hand as if he knew exactly where it was going. The third umpire did not even ask to see it at full speed. Both on-field umpires were unsure about what happened but the third umpire had made his decision on what turned out to be only the 7th case of on-field obstruction within seconds.

Regardless of the result, Stokes reacted in a very mature way to the decision. For a man who had punched a locker after getting out, this was a sure sign of growth.

What drama will the third ODI bring? 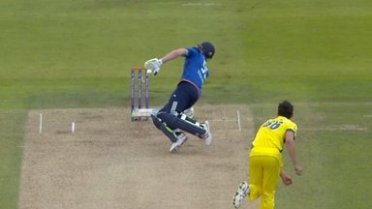 It was an uncharacteristically dominant show from the Indians. The 2-1 scoreline did not do their performance justice. It could have easily been 3-0 were it not for a audacious 162* from Dinesh Chandimal.

Sri Lanka won the toss and elected to bat first. They appeared to be out of their depth though as Ravi Ashwin picked up six wickets and India bowled out the hosts for 183 (a rare moment for India in recent years). The second innings saw India take a 192 run lead with the help of captain Virat Kohli and Shikhar Dhawan. It looked as though India could win by an innings as Sri Lanka were reduced to 5-3 within the first five overs of their second innings. However, a stunning performance from Chandimal gave Sri Lanka a target to bowl to. India were chasing down 176 on a ground where 99 had been the highest successful chase. Sri Lanka’s bowlers (in particular Rangana Herath), along with the daunting statistics of fourth inning chases at Galle saw India fall 63 runs short. A collapse that was all too familiar for India. It was a disappointing performance from the batsmen as Ravi Ashwin’s ten-for and Ajinkya Rahane’s record breaking eight catches went unrewarded.

However from a 1-0 position, India bounced back impressively to win the second test by 278 runs. Opener Shikhar Dhawan was ruled out through injury, however his counterpart Lokesh Rahul made a huge impact scoring his second Test century. Contributions from the captain and Rohit Sharma gave India a solid score of 393. The visitors once again bowled our Sri Lanka and went in to bat with a lead of 87. A magnificent century from Ajinkya Rahane gave Sri Lanka a daunting target of 412. However once again Sri Lanka’s batsman failed them. The hosts were unable to muster up enough grit to send off Kumar Sangakkara on a high. Sri Lanka collapsed for 134.

In the third test was a slightly more rocky ride for India. They were put in to bat and bar Cheteshwar Pujara, the batsmen fell like flies. Only a 104-run partnership between Pujara and Amit Mishra helped India to reach 312. Not a single other player scored above 30. Once again however, Sri Lanka’s batsmen let down the impressive performance from Dhammika Prasad and the other bowlers. Angelo Matthews’ men fell for 201 as Ishant Sharma took five wickets. Were it not for their first innings 100 run lead, it would have been a much closer match as India’s top order once again failed to perform. They were however saved by their middle-lower order and Sri Lanka were unable to chase down the total.

It had been an incredibly long 25 years since India took 60 wickets in a three Test series. It was also only the fifth ever series India had won away from home, with the last one (against a team other than Bangladesh or Zimbabwe) coming in 2004.

Hopefully Kohli’s drive will continue to push India in the right direction (results-wise and not attitude-wise).